Springfield Armory has launched the all new Saint Edge AR pistol and taken firm aim at the established masters of the division with a premium firearm.

The Springfield Armory Saint is one of our favorite $1000 AR-15 rifles for sale and it is our favourite AR pistol for $1000 by a long way. Now it has declared war on the Sig Sauer MPX, POF Renegade, Daniel Defense DDM4V7 and other military-bred hardware with the Springfield Saint Edge.

The new Saint Edge pistol is a big jump into the world of piston-operated big boys and adjustable gas blocks, but it’s nothing Springfield Armory hasn’t done before.

The Saint Edge rifle sits comfortably among the elite and its 1911 pistols are right up there with the best of them. Nobody bats an eyelid at the top tier price tag there. So we’ll get used to it with this new AR pistol taking a place at the top table.

The Springfield Saint Edge pistol is priced at $1,599, but it’s specced even higher than that. Much higher.

Thed Springfield Edge pistol  measures just 26 inches in length when collapsed and the barrel is 10.3 inches. It gets a 1:8 twist and it’s Chrome Moly Vanadium steel. All the cool guys are using that now, rather than simple steel barrels and chrome linings.

The lower receiver is machined from 7075-T6 billet aluminum, the upper receiver is forged from the same material and hard coat anodized for long-lasting protection. Springfield Armory’s patented Accu-tite tension system to keep the receivers pressed tight together and a receiver extension removes wobble from the pistol brace.

Any movement is bad for accuracy and this is just an idea of how far Springfield Armory goes to get the basics right with its AR-15s and AR pistols. The Saint Edge is serious kit at every single stage of the game.

An enhanced M16 Bolt Carrier Group is finished with Melonite and the bolt itself is the absolute highest grade 9130 steel coated in MPI Nickel Boron.

You get several levels of adjustment on the carbine-length adjustable gas block so you can tune the pistol for use with a suppressor and subsonic or supersonic ammunition when you want to bring the noise.

The pistol grip has serious stippling 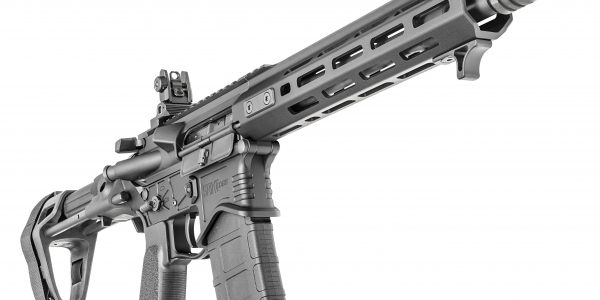 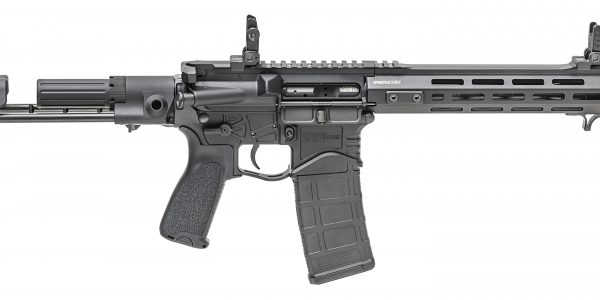 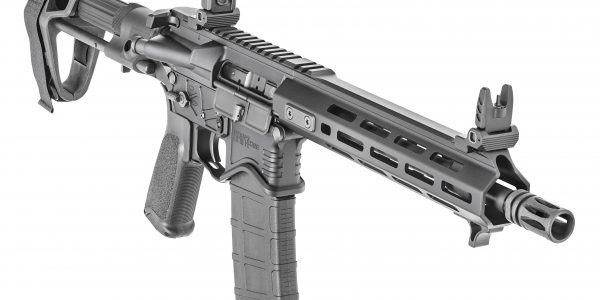 Springfield Armory has included one of its own match triggers with a short reset that gives you a competition trigger feel in a much more self-defense oriented package. The slim, free-floating handguard will be patented before long and it’s M-LOK compatible so there’s space for all your tactical gear on the Springfield Armory Saint Edge pistol.

A Maxim Defense CQB pistol brace completes the slimline look and is similar to the upcoming Honey Badger and the benchmark in many ways, the Sig Sauer Rattler.. Even the charging handle is a mid-size to make it easier to manipulate and save weight. The trigger guard, meanwhile, is oversized so you can use it with gloves and it’s also a simple strip that connects the mag well to the pistol grip.

Simplicity is good and this is a nice touch. Conversely, we think we could do without the contrived wave design in the mag well and a smooth curve up front might have been better. But the mag werll is flared, the functionality is there.

It’s the little touches that have to count, as the Springfield Armory goes head to head with some almighty competition. It isn’t quite as cohesive a design in the early pictures, too, and the back end in particular looks a little messy thanks to the receiver extension and the added functionality of the Maxim Defense CQB brace.

The flip-up iron sights are a nice touch, too, although you have to think that most of us would prefer to strip them off and put a red dot on a gun of this caliber. Still, they’re there if you want them.

Overall, the Saint Edge pistol is function before form, and we’ll have to see how the buying crowds react to that philosophy. Personally, I like it, this isn’t a catwalk fashion show after all.

This is a seriously strong sector right now and even POF is suffering at the hands of Daniel Defense, while Sig Sauer comes under attack from Bren. It’s not a sector you can screw up, so Springfield Armory better get this one right.