Where to buy a HK SP5K

HK aren’t just expensive, they can be seriously frustrating to find in the first place. So to save endless hours of surfing, here are direct links to our favorite dealers.

If none of them have one, probably check back in a week because there just aren’t any right now. This could save you time and serious frustration…

We have dutifully included the HK SP5K 9mm in every ‘best of’ list going in recent times, while noting that nobody actually seemed to have one in stock.

They are basically as rare as rocking horse shit. Once you have one, it’s awesome. Getting one can be a royal PITA.

The Hechler & Koch SP5K is the best 9mm SMG in history, quite possibly, and has been into action with the likes of the SAS, Navy SEALs and many more in military HK MP5 spec.

That fully auto and the mil-spec weapon has evolved over the years and now comes with a collapsing PDW style brace and a simpler handguard.

It is also one of the best submachine guns in the world, as voted for by the elite special forces, counter terrorist units and SWAT teams around the world.

The barrel length, the fact it sits so comfortably on a bungee sling and the lethal accuracy and reliability have made the military version even more popular than the civilian semi-automatic Heckler & Koch SP5K. 9mm.

In reality, the civilian version is slightly longer thanks to the proprietary handguard, but when you see side by side pictures then the military version certainly looks longer and thinner. The HK MP5 vs SP5K, have a look for yourself. 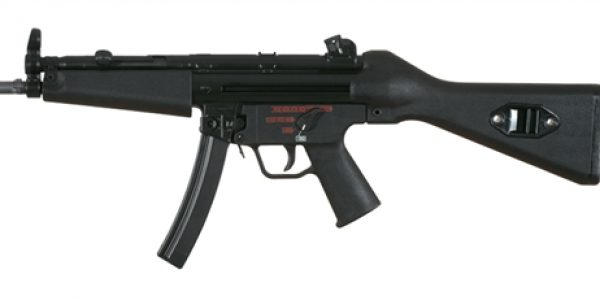 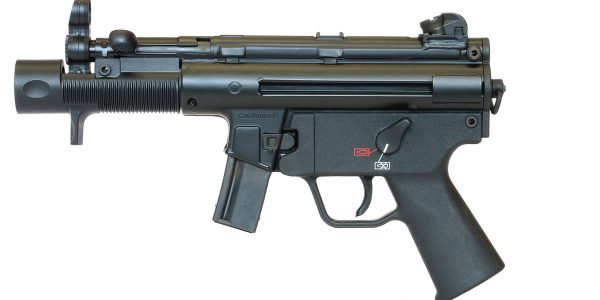 Now You Want an MP5 Instead?

You can buy a HK MP5 machine gun right now, although you will need the Third Class firearms license and then there’s the small matter of the $150,000 price tag.

Actually that buys you a set of 3 HK MP5 vintage firearms from gunbroker Euro Optics. It’s a hell of a set, with consecutive serial numbers, and it pretty much is the ultimate collection for machine gun enthusiasts.

We’ll cover these separately to avoid confusing the issue too much. But if you’ve got $150,000 to spend on guns, for some reason, and you want the best, this is for you.

OK Back to Places to Buy a HK SP5

The consumer-grade HK SP5K 9mm and MP5 have a lot of differences, and we  like the semi-automatic shop bought version. It’s so short and compact that it could be a concealed carry option, if you really need to bring the noise under your jacket.

The styling is just perfect, retro chic SMG that is a subtle homage to the old world MP40 SMGs that were standard issue in World War II. The civilian Sporting Pistol (Hence SP in the name) marks the return of the legendary HK roller-delayed blowback system that first surfaced on the HK G3 rifle for sale.

It’s a 9mm that can hang on a sling, or you can fit a folding stock to it and turn it into an absolute beast. You can also buy 40-round magazines for your HK SP5K  to give this pocket monster an added sting in the tail.

Put the right red dot up top and this is about as operator as pistols get. It’s a classic design, but it’s about as short as you could possibly want. The barrel is shorter than a full-size 9mm handgun, think about that. Suddenly it makes sense that this supremely reliably piece of hardware has been a personal favorite of the best fighting men around the world.

The HK’s time might have come with the special forces, as the improved suppression capabilities of AAC 300 Blackout mean that the likes of the Sig Sauer Rattler and Daniel Defense DDM4V7P are taking over slowly from the old Heckler & Koch Sporting Pistol.

But this is an icon, the HK SP5K is already in the firearms Hall of Fame and it can still hold its own with any of those weapons in the right circumstances.

If you don’t have a suppressor, then the HK and the cheaper 9mm Luger might actually be the more versatile weapon thanks to the large variety of 9mm ammunition on the market. Seriously, fill this thing with LeHigh Xtreme Defense and you have a total weapon of mass destruction on your hands.

9mm has taken over as the self-defense round of choice, which has brought great strides in the ballistics technology. The barrel length on the HK means you’re really looking at a short-range, self-defense gun, that’s it’s main window. So the 9mm Luger makes a lot of sense, it’s just that Blackout ammunition gives you options.

Fill the Heckler & Koch SP5K 9mm with cheap ammo and it’s a faithful, low recoil range toy that does a surprisingly good job in terms of accuracy and repeatability, despite that short barrel. A good reflex sight on this and you can take aim up to 200 meters, and be pretty sure you’re going to nail the target. So yeah, with some hardcore ammo, this could even be a hunting weapon.

It’s not really meant for that life, though. This is a weapon of war, particularly urban warfare where the compact nature of the HK SP5K means that only the 300 Blackout pistols can really stay with it. It’s a great option for home defense, general shooting at the range and just as an awesome thing to own for the rest of your life.

It’s an icon of a submachine gun, one of the most famous guns of all time, and it will be remembered long after it is gone. The gun reviews and user reviews online absolutely love this thing. Not one of them says it isn’t good value and at this price, that’s something in itself.

Get your HK SP5K 9mm while you can, and if it’s gone by the time you click to buy, don’t blame us. We tried to tell you…

So treat yourself, buy a gun online and make it one of the best 9mm pistols of all time.

What is HK Roller-Delayed Blowback?

The system is sometimes confused with the Roller Locked system, but they’re different things. It’s a rare system and only a few manufacturers have dared to go this way, even though it has been us since WWII.

It’s a system that the industry agrees lends itself to improved accuracy and reliability. It’s all win then? Not quite…

The operating system does limit your loads to a narrow weight band, but that’s less of an issue with 9mm, especially for the military that tend to standardize. So for the Heckler & Koch 9mm pistol, it makes perfect sense.

This video explains it better than we ever could, so enjoy it if you’re into this kind of detail stuff.